This site is dedicated to :

Zuwayumo, a rural African village of subsistence farmers, near Mzimba in Malawi 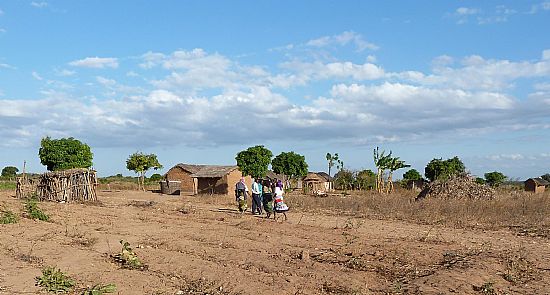 People in Malawi are going hungry. Drought and erratic rainfall have resulted in failed harvest. Maize, the staple food has run out and is now too expensive to buy.

Zuwayumo is a remote rural community of subsistent farmers. There are no roads, transport, electricity or shops. Life is hard and income is low or non-existent. Poor harvests have a devastating impact on the community.

Our visit, with a Malawian friend, gave us the inspiration to help the communities in this area and our focus was on providing a clean, safe and reliable source of water.

Thanks to the generosity of the local people of the Cheddar Valley area and Crook Peak Parishes, the installation of a water pump was completed in November 2011 .

The links with this rural area of Malawi will be maintained so that support can be provided where and when it is needed in Zuwayumo and district.

LATEST INFORMATION FROM A VISIT TO MALAWI AND ZUWAYUMO IS AVAILABLE

Some of the projects we have supported from generous donations

Cecelia’s House - Cecelia is a polio victim who is retiring from her job in the local hospital and she will have to give up her accommodation. She looks after orphans and will need a house. Some assistance in providing materials such as bricks, cement and water is being provided.

Oxen and Plough - All the work in looking after the land and growing their food has been done with hand tools. Two oxen and a plough have been provided.

Food Shortage - There are times when crops fail and maize is in short supply. Maize has been supplied to the villages affected.

Transport for villagers - Just about everyone has to walk and if you are fortunate a bicycle can be used to travel longer distances and carry everything including wood, cement, maize and people. A bicycle was supplied to the settlement of Kamwazeka.

Carpenter - We have financed this start-up enterprise with some basic tools such as a plane, glue and timber.

Wheel Chairs - Two wheel chairs have been donated and refurbished.

Teacher Training - We have provided the fees for Juliana's teachers training course. She qualified in 2016 and is teaching locally

All purpose Cart  and Oxen- A purpose built cart was made, to the specifications of the Village, in the nearest town, Mzimba. It will be used for transporting everything from produce to market and people to, for example, Hospital.The oxen Amanda and Arabella will be used to pull the cart.

Support for Agricultural Student (Daniel Moyo) - A refurbished laptop PC was provided to a student attending the Lilongwe College. We are also funding his fees for the three year course at Lilongue Agricultural University on Natural Resources and Community Sciences.

Food Shortage (2016) - The drought in Malawi has suffered its worse drought in a decade. Maize has been supplied to 33 needy families in the Zuwayumo district click here for the story.

Transport - A bicycle has been supplied to Zuwayumo for local transport. It also has a carrier for transporting the elderly or ill to Mzimba Hospital.

Goats (April 2017)- The village was raided over night and all their goats were stolen. Six replacement goats were donated and improved stock proofing has also been erected.

Scroll down for more details and pictures on where we are helping in Malawi.

Safe Water  - A water bore-hole and pump has been installed !

A heartfelt thank you to all those who have supported this great achievement.
Thanks to the generosity of many people and lots of local people in the Cheddar Valley area and Crook Peak Parishes, the installation of the water pump in Zuwayumo is successfully delivering water to villagers!
On November 23rd 2011 one of our team, Chrissie Hay, was at the official opening of the pump and water flowed into the first of the huge numbers of water containers amid much joy and singing.

Click here to see a video clip, from a mobile phone, of the first water to be pumped and have a look at the 'Photo Gallery' on this web site for more pictures.

The bore-hole and pump is located in the settlement of Zakheta in Zuwayumo and will also support the nearby settlements of Kazumba, and Chingayipe.

A heartfelt thank you to all those who have supported us in this great achievement. 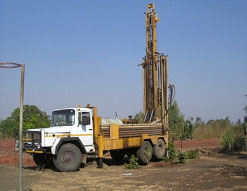 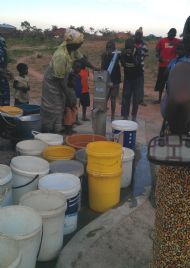 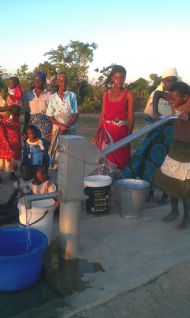 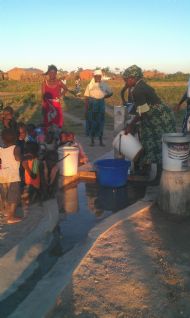 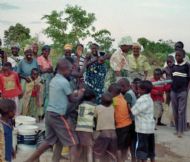 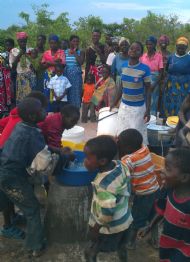 Delighted children playing with, and drinking, safe clean water from their own pump

Washing Area - It would be normal for the ladies to go down to the river to wash clothes. In May 2012 some rudimentary sinks for washing near to the area of the pump were added. We have made sure it's well away from the pump to avoid contamination of the drinking water supply. 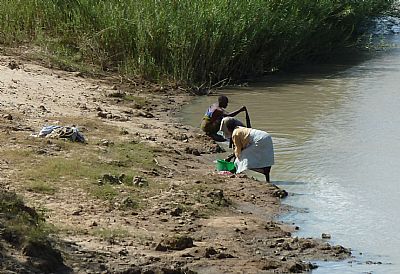 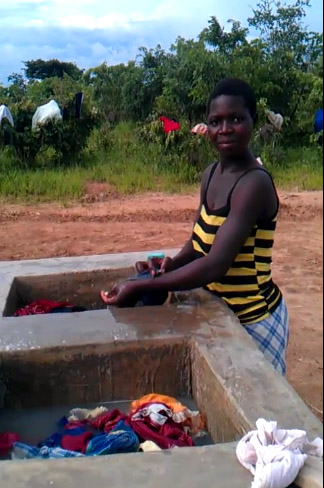 Cecelia’s House - This house has been built, by the local people with bricks made from mud and fired, on site. Buying cement and construction of a latrine during March and June 2013 has been provided. 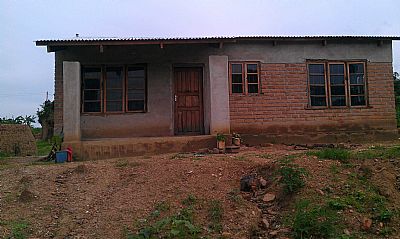 Oxen and Plough - In February 2014 a locally built plough and ridger was purchased from the market in Mzimba. Two local oxen have also been purchased, their names are Amanda and Annabel. The plough will be located in Zakheta for use in the surrounding area. 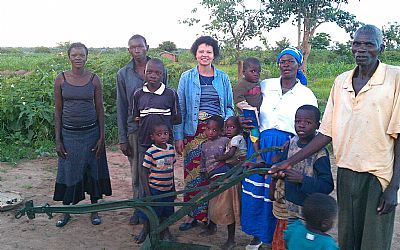 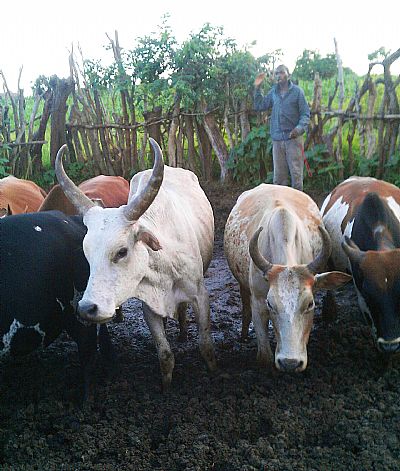 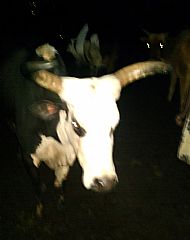 Food Shortage - Our close contact with this area enables us to know when the people are desperately short of their staple diet, maize. This may be because of a poor harvest or the high cost of seed. We have been able to respond and supply the most needy and will continue to do so when needed.

Transport - There is no transport - buses or cars, to take people to the Hospital particularly when they need treatment for bouts of malaria.  A bicycle has been provided for the settlement of Kamwazeka. An accepted means of transporting people, especially the elderly, is to have them sitting on the pannier rack. This picture shows Anna with the new bicycle. 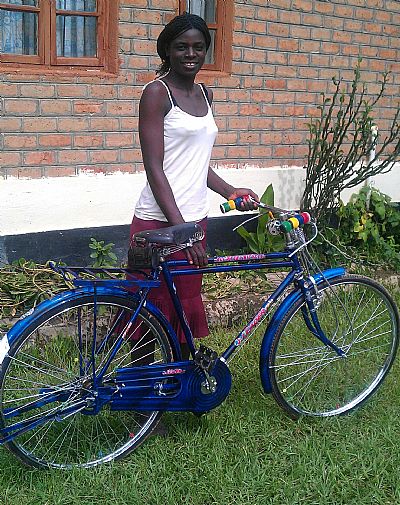 Carpenter - Noel Nkhata is a young self-taught carpenter whose good skills, with poor tools, are appreciated in his community. Noel lives in the settlement of Kmzalanga. Wooden doors need frequent replacement because of damage caused by termites and other insects. Metal or plastic doors are beyond the means of rural communities. He wants to be able to make doors for local consumption but has no money to buy the necessary tools. We have financed this start-up enterprise with some basic tools such as a plane, glue and timber.

Wheel Chairs – Two wheel chairs have been donated and were refurbished before being air-freighted to Malawi. One is for Cecelia, a polio victim who we support. The other will be located at Kamwazeka for general use by a number of elderly people.

Teacher Training – Juliana Nkhata, seen standing in the picture below, lives in Kmzalanga. She has been accepted for teacher training at Loudan Teachers Training College in Embangweni and started in September 2014. Funding for the course and exam fees is being provided for this two year course. 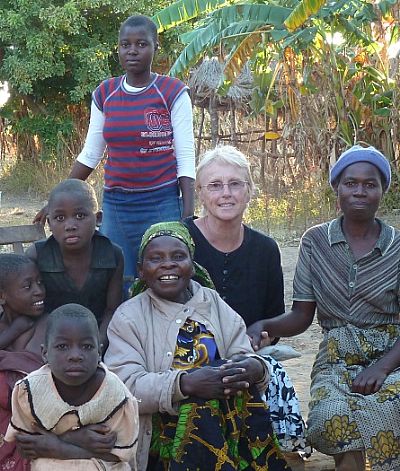 All purpose Cart - Head of the Village, Felix Zakheta Kakota, and his wife inspecting the cart at the workshop in Mzimba. 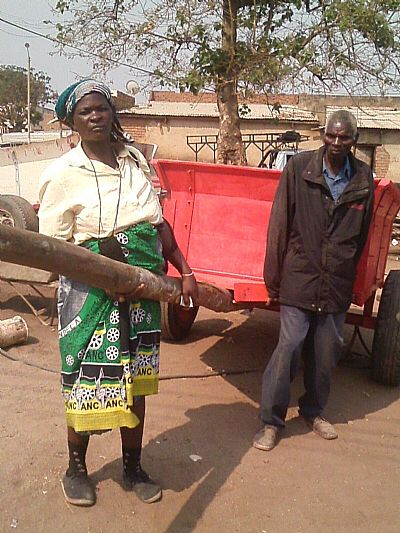